I feel that living by the basic rule of "Don't be a dick to other humans" is pretty simple. Apparently I'm in the minority with this way of thinking. Holy cannoli has that been a hard lesson to learn this year!

I haven't posted in 11 months. Posts had gotten few and far between for about a year prior due to mental health stuff, but this past year... man... talk about a roller coaster of emotions! Between the pandemic, everything leading up to the election, and personal issues, I'm quite impressed with myself for not getting put in a padded room!

I told an anti-masker that if I thought there was a chance that jumping up and down on one foot every hour on the hour would keep someone from getting sick, I'd do it. I hate wearing masks. HATE IT. But I do it because if I didn't, and someone close to me got sick, I don't think I could live with myself. I'd rather err on the side of caution.

No biggy, right? Are you laugh-crying right now? Yeah, me too.

And you know, that's pretty much how I live my life. My child came out as trans last year, and a family member said it's just a phase, blah blah blah. Okay, sure. He's 12 years old, he's still figuring out who he is, it could be a phase. But, I know A LOT of trans folk who knew when they were very young that they were not the gender they were assigned at birth. So, maybe it's not a phase, and this is who he is.

Again, why not err on the side of caution?

Even if you don't believe trans folks exist (and if that's what you think, I'm happy to chat with you about how you're wrong), why not just go along with it? Best case scenario, you show a person that you are a compassionate human. Worst case scenario, the person goes into a major depressive state because their loved ones don't accept them, and they commit suicide.

The statistics on the chances of that happening are, well, devastating. So maybe don't go with that option?

I stopped believing in god a long time ago. I don't walk around telling Christians they're wrong. There are around 4,300 religions in the world. IF you believe only one of them is the right one, how the heck do you know yours is that one?? Maybe you telling someone they're going to hell for who they love, who they feel they are, is pointless and futile. You do your thing, let other people do theirs, and we all live in harmony. Capisce?

So, be kind to other humans. You don't know what they're going through. Best to err on the side of kindness, I think. 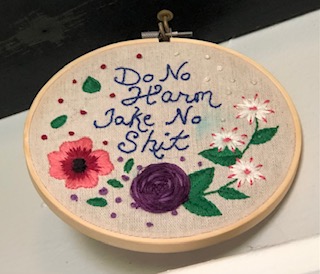 Now... I also live by the "Do no harm, take no shit" philosophy. Yes, be kind. But if someone is unkind to you, let 'em have it. It took me too long to learn that being kind to bullies and abusers doesn't pay.

There is a difference between kind and nice. You can be kind to someone - explaining your boundaries, while not being nice - telling them to fuck off when they hurt you, after you went the kind route and they still acted like a dick.