Throwing Eggs Does Not End a Panic Attack


I’ve never enjoyed cooking. I have ADHD so I have a hard time following recipes – my eyes jump around on the page and I always end up skipping a step. Making it up as I go doesn’t work either – When I look at all the food in the pantry, I see ingredients, but my brain doesn’t put them all together in a way that would make a dish.

While cooking I get myself so worked up because I’m afraid of failing. I’m afraid of ruining someone’s meal, so I work myself into a panic attack. Of course I didn’t realize that’s what was happening until about a decade ago. Before that, I thought cooking just made me angry.

I’ll never forget the time my first husband threw eggs at me because I was cooking and upset. I was making breakfast and it wasn’t going my way, as usual. In retrospect, I was obviously having a panic attack, but all he saw was that I was in a bad mood. I handed him his plate of eggs and bacon and walked back to the kitchen. While walking across the room, he threw the plate at me. It smashed a porcelain pillar table. I never understood why he did that. Did he think throwing a plate of eggs at me would cheer me up?!

When I left him, there were still eggs on the ceiling.

My struggle with weight and dieting has certainly not helped my issues with cooking and anxiety. The ingredients are much more expensive so I’m even more worried I’ll screw it up, the recipes are typically more complicated, and I’m hangry on top of it.

All this aside, I have been cooking more lately, and actually succeeding. My ex used to say I could burn water. I agreed. I rarely tried to cook because I knew I would fail. Now I have an amazing support system of people who encourage me, tell me I can do anything, and tell me when I’ve done well. I’ve found that I get excited to see how a new dish will turn out!

Granted, the anxiety is still there. I’m pretty sure I was equal parts nervous and excited to see how my crock pot chicken and stuffing turned out yesterday. But, because of all the encouragement I had, I didn’t work myself into a panic attack over it.

Also there were Pillsbury Crescents – if all else fails, we would just eat those and be happy. Mmmm buttery carbs… 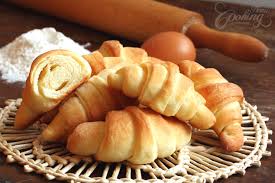