When your medicine makes you worse


I’ve been talking a lot lately about my depression getting worse. I have a few mental health issues, but anxiety is always the big one, standing front and center. Recently depression shoved its way to the front of the line.

I have logical reasons to be depressed. It’s been a rough year and my finances are in the crapper. But I also have a lot to be thankful for, and usually that’s enough to keep me from getting completely down. Lately, however, my downfalls are all I can think of.

I’ve been on Pristiq for depression and anxiety for several years. It’s worked far better than anything else, and I’ve tried quite a few medications for these problems. I take Clonazepam for panic attacks. I can take two a day, as needed, but sometimes I go weeks without needing one at all. As my financial situation has been getting worse (summer care for children is so much more expensive than before and after school care) I’ve been having more panic attacks, so I’ve been taking the Clonazepam more regularly.

It turns out that could be what’s caused my depression to go crazy.

When I started having suicidal ideations I contacted a therapist and my primary care physician immediately. My doctor advised me to start doubling my Pristiq dose and to stop taking the Clonazepam, as it can be a depressant.

I guess when he initially prescribed it to me, depression wasn’t a big enough concern to be deterred from taking Clonazepam. Or maybe it’s just like any other drug for mental illness. I’m pretty sure all of them come with the disclaimer to contact your doctor if depression worsens or if you have suicidal thoughts.

So, four days ago I started doubling my Pristiq and stopped taking the Clonazepam. I had a bit of insomnia the first few nights, and was still fairly down, but today I feel perfectly fine. So, yay for drugs helping! And boo for drugs making it worse in the first place!

The moral of the story here, my faithful cucumbers, is that you should maintain a good relationship with your doctors. I see mine regularly and keep him updated on any changes. Because of this, he was able to quickly help me when I needed it, and I didn’t even have to go in to the office. 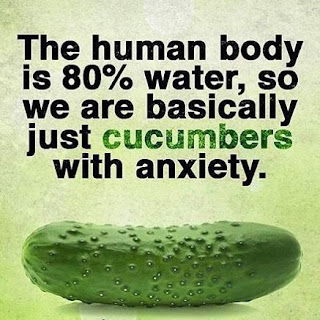