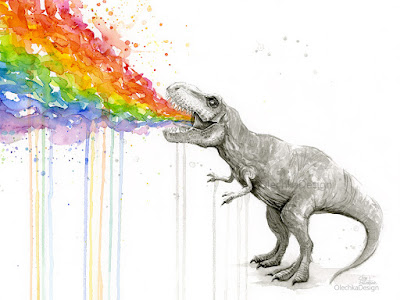 For years I felt guilty when my queer friends discussed being assaulted for simply being themselves. Sure, I was queer just like them, but to the outside world, I was straight as an arrow. No one judged me for being queer because no one knew. I could “pass”, and I felt ashamed for hiding behind my seemingly heterosexual relationships.

That feeling is one of the things that led to me coming out. Coming out was terrifying. I knew a large portion of my family wouldn’t approve. I worried about having problems at work when people found out. There are still a lot of states where you can be fired for your sexual orientation. But how could I not be honest with the world, when my friends were being persecuted and I was hiding in fear?

Now, after I’ve come out, I do think some people look at me differently. It could be all in my head (Anxiety is constantly telling me the worst), but I don’t want to stop and find out. My family doesn’t discuss it – and if they don’t read my blog or pay attention to my Facebook page, they may still not know. I didn’t tell them in person. Hi, I’m queer. And chicken.

I haven’t broadcast my queer identity at work, but I have told a handful of people, and I had a picture of me and my ex-girlfriend on my desk for a while. There are a few people at work who seem to look at me differently now. They don’t stop by to chat as much as they did before, and they seem to choose their words more carefully.

And of course I’ve had the initiation experience of having old white men looking at me like I’m a freak when holding hands with a woman in public. That one doesn’t bother me, though. Let them be disgusted. I’ll be disgusted by them right back.

And yet, with Trump in power and all the hate getting worse by the day, I still feel like it’s not enough. I promised myself I would attend rallies, marches, and protests. I conquered my anxiety and spoke with people at the college where I work about helping with the diversity efforts on campus.

Finally, after multiple pep talks to myself, I went to the office of the psychology professor who runs the LGBTQ group on campus. She had already been given my name by the diversity folks, but I wanted to introduce myself and let her know I’d be attending the meeting and am eager to help in any way I can. She was incredibly nice and happy to hear that I’ll be there.

I was happy and relieved to have gotten that over with... then I realized I had to let my bosses know that I’ll need to leave a few minutes early to attend an LGBTQ meeting.

I think this might be a journey that never ends, but it’s getting a little easier with each step.

***Addendum - I went to the meeting, and it was wonderful. Everyone there was so welcoming and friendly.

And they gave me gay chocolate. 💜