You Can't Be Careful on a Skateboard: Mental Illness and Breakups 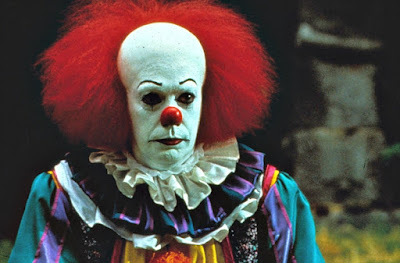 Anxiety is throwing away your happiness because you can’t breathe without your children, and your ex manipulating you into coming back, because Anxiety says there’s no other way you can be near them. Having Anxiety whisper in your ear that you’ll never be happy, that you’re a bad mother, and that the abuse you’ve been put through will never end no matter what you do...well, those whispers can be enough to tear anyone down.

What I’m not saying is that I’m not the only one Anxiety whispers to: I was dumped for the abusive ex, and mental illness is saturated into the whole situation on all sides.

Mental illness is a fucking dick.

Naturally, now Anxiety is coming at me pretty hard, and Depression is knocking at my door asking to come in. I locked the door - we'll see how long that’ll keep Depression out, but Anxiety will not be deterred. Anxiety comes in through the pipes like the Pennywise/blood geyser scene in It.

At first I was just pissed. Nothing makes me angrier than giving in to manipulative, narcissistic assholes. Because then they succeeded in forcing you to do what they want...and that makes them think they can keep being manipulative, narcissistic assholes. And then the abuse continues until you finally leave, and then they abuse someone else. And abuse in all its forms pisses me the fuck off.

This morning the shock had worn off, and anger was mostly replaced with sadness and hurt. But the more I think about it, the more Anxiety creeps in – you know, like Pennywise whispering to Beverly through the drain pipes, and then shooting a geyser of blood all over her and her bathroom that not everyone can see.

Anxiety says I should probably never enter into a new relationship, because I’ve got a fucking plethora of failed ones. Anxiety won’t let me see the good times in those relationships. Anxiety only lets me see the hurt when they end. So what’s the point? They’re all going to end, there will only be sadness. Thanks, Anxiety.

Anxiety says no one will take me seriously as a queer woman, since I’m no longer in a relationship with another woman. Oh, she must have just been going through a phase. You know, like they say about every bi/pan/omnisexual person who doesn’t look queer or isn’t actively in a queer relationship. I’ve only recently become comfortable in my skin as a queer person, and I don’t want to go back to being doubted or not taken seriously. I’m also not going to rush out and find a woman just to look the part.

Anxiety says all the holes in my walls from where she had pictures hung will be constant reminders of her absence that will make me miserable and keep me in mourning.

Fuck you, Anxiety, I’ll find something to put over the holes. Maybe I’ll get some framed photos of Pennywise to remind myself that I can beat Anxiety just like the kids in the Loser’s Club beat the Dancing Clown.

Apparently I’m really stuck on this analogy, but it fits.  After all, you can’t be careful on a skateboard.

And after all that, I'm anxious about what she's going to think about this post. Emotions are dumb.
anxiety breakup depression It mental illness Pennywise