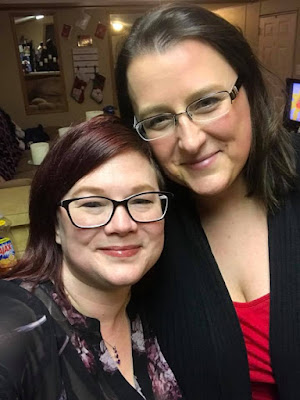 Photo: Me and Amanda

Imagine you love reading books. It’s who you are as a person, it’s how you identify yourself. You are a book lover. The feel of the book in your hands, the smell of the pages, the way you forget all your troubles when you get lost in that book…that’s the essential you. Now imagine it’s like Fahrenheit 451. Society thinks it’s fundamentally wrong that you love books. Society judges you for your love of books. But you didn’t choose to love books, it’s just who you are. You were born to love books.

Imagine everyone around you loves to watch television, so you’re expected to love watching television as well...even that show that you really hate. You play along. All your life, you watch television with the rest of them...but secretly you long to read a good book. You can’t just be yourself, because if you mentioned your love of books, they would grimace and never look at you the same. So you pretend you’re someone else. You pretend to love television, and only television.

Imagine living your life never letting people know who you are. Not really. You’re never really happy, because living a lie is exhausting. You hate yourself because no matter how much you want to, you can’t just be like everyone else. If only you were normal, then you could be yourself and everyone would accept you, and you wouldn’t have to worry about hiding your books.

Well, I love books. I also love television. I’ve even had my eye on a radio or two.

What I’m saying is, I’m queer.

I dislike the idea of coming out. Years ago, when I decided I was tired of hiding my love of books – ahem – women, I didn’t tell anyone. I just stopped trying so hard to hide it. Why should I have to announce my preference to the world? Straight girls aren’t required to announce that they like boys, so why can’t I just be who I am? So, when I was with friends and they would talk about cute guys, I’d mention a cute girl. Sure, I got some looks, but no one said anything.

I went on like that for a while, still dating men because where do you even meet women who like women?! I’d never been to a gay club and none of my friends went to those places, so that was out. My anxiety didn’t let me go to one of them until just last year. (And let me tell you, I loved it!) Just by chance over the years, I managed to meet a few women who were also interested in women. The first time I kissed a woman, I’m quite sure fireworks went off in my head.

It was still years (and a few husbands) later when I really dated a woman for the first time. By this time I’d had a few flings with females, but nothing emotional. When I decided I was tired of flings and really wanted to date a woman, I did what so many do: I signed up for OK Cupid.

Holy moly, did I get a lot of attention on OK Cupid! Apparently women love me. Must be the boobs!

There was one woman I really connected with, so we agreed to meet. We sat at Buffalo Wild Wings for hours drinking hard cider, eating appetizers, laughing, and talking. It was the most natural thing in the world. It was like hanging out with a friend, but with flirting. You know, like a date.

At the end, she walked me to my car and kissed me. *Fireworks*

She and I dated for a while. With her I experienced old men giving us the stink eye while we held hands in public. I also experienced something I hadn’t expected: a lot of no one giving a damn that we were together.  Holy moly. It’s like we were a normal couple! Who’dathunkit?!

Now that I’d conquered being queer in public, it was time to conquer being queer in my personal life. My friends were and continue to be incredibly accepting. The more I stopped hiding who I was, the more I felt like myself. I started identifying as bisexual. I made other friends who were various types of queer. I discovered that quite a few of my friends I’d thought were “normal” also queer, and, just like me, had been quiet about it. I suddenly felt so comfortable around my friends. It actually felt like a weight had been lifted off my shoulders. I even told my bosses at work. I put a picture of me and my girlfriend on my desk this week. Only one person at work seems to be acting differently toward me. I can live with that.

While talking to my favorite gay Jew friend about the super cute transman at work and how maybe I’m pansexual because I’d absolutely be open to dating transfolk or anyone, really, as long as we click. He said it sounds like I’m omnisexual – attracted to all genders. I’d never heard of that, but upon looking it up, I realized that’s exactly what I am. Some people get annoyed with labels, but after hiding from my true self for most of my life, I find comfort in them. “I yam what I yam and dats what I yam,” in the words of Popeye the Sailor Man…

I’ve become obsessed with rainbows. Dammit, I’m proud to be who I am, I’m putting rainbows everywhere. Of course, this was a very passive aggressive move, because I still haven’t really come out to my family. But I don’t come out, remember? “I yam what I yam…”

Okay, so what I yam is terrified that my family is going to think I’m gross and give me weird looks and lecture me about going to hell and not let me bring girlfriends home because they’re uncomfortable with who I yam.

I’m a giant hypocrite. Where did my confidence go? Also why can I not stop talking like Popeye the Sailor Man?!

So, here I am. Putting it all out there on my blog. There’s no turning back. Maybe my family doesn’t even read my blog, and I’m still safe. Maybe they do and they’ll tell me it’s okay. Maybe they’ll read this and still won’t let me bring women home. It would be a shame because I currently have the most wonderful girlfriend… But at least I won’t have to pretend to be someone I’m not. That shit is exhausting.