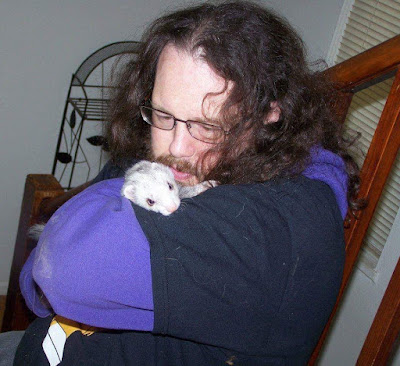 This week's guest post comes from a friend who is a great writer and general all-around swell human.

Neither of my parents beat me when I was growing up. They didn’t yell at me all that much, either. They tended to take that aggression out on each other. I distinctly remember, back when I was somewhere around 4 years old, being taken to my grandparents’ house in a police car. When I was much older, I found out that my father had removed the distributor cap from the car and was threatening to kill my mom. There was also the time that she had to hit him on the head with one of those obscenely large and heavy beer steins to get him off of her. For so much of my young life, it seems like the house was filled with screaming and anger.

But it wasn’t directed at me.

I tend not to talk about this much, but I was never molested as a child. I was never a little kid, sitting down with my mother and trying to find a way to tell her what had happened. I never had to sit in a cold, sterile room with some stranger and talk about the humiliation and horror of the ordeal. I never had to deal with my paternal grandparents telling me that I lied and making me write an apology letter. I never had to deal with relatives who held tightly onto the belief that I was making things up to get my father in trouble, even after he admitted his guilt. My sister was the one who got to experience that bit of joy.

But nothing happened to me.

So, I should be fine. Right? RIGHT? Please, someone, tell me that everything should be hunky fucking dory in the skull house of Anton-ville. Because it sure as hell has never felt that way, even though that is what I told myself for most of my life. If it didn’t happen to me, then I don’t have any right to bitch about how tough I have it.

Because it wasn’t my trauma.

Here is what did happen to me: I spent more nights than I care to count with my body tightly wrapped around one pillow while I gripped another one around my head to keep out the screams. I never knew quite when things would go just that touch too far and I’d get another trip in the back of a police car or, ooh yay, an ambulance. That would’ve been a new experience. I spent most days wound tight, anticipating the next spark that would set off another round of explosions.

I have a memory of my sister and I sitting around on a dull Saturday, complaining about being bored. Her telling me that she would show me her toy if I showed her mine. Me lifting up the tank I was playing with and her answering “not that one.” Me being confused by it, but going back to what I was doing without realizing what had happened. I remember being in what I guess was the courthouse, with someone I didn’t know asking me a bunch of questions I didn’t quite understand and being scared out of my wits about it. I remember realizing that I was pretty certain my sister hated me and realizing that it may well have been because she saw my father in my face. Then there is the abject terror that consumed my teen years, the fear that I would grow up to be just like him.

There are the long term effects, like my persistent, fairly unreasonable fear of dealing with the police in even on the most pleasant of circumstances. My poor wife has to cope with my assumption that every silence is indicative of some looming problem and that every problem is a sign that it has all finally come crashing down. Conflict horrifies me and I’m anxious as fuck pretty well constantly.

As much as I tell other people to stop looking at their pain as a dick measuring contest, that it isn’t about who has more or less as much as it is about acknowledging that it exists and working to heal as much of it as we can, I’ve always had a hard time applying that to myself. It’s hard to allow that my own experience carries its own special scars. Harder still to admit or recognize the continued effect on who I am and what I do as a grown ass man at the ripe age of forty.

This is the point where I feel like I am supposed to say something comforting. Where I feel like I should have some kind of solution to the problem for those others bearing the trauma of bearing witness to the trauma of others. I don’t have one, though. If that’s what you came for, then I’m sorry. But if you stopped by for reassurance that you aren’t the only one struggling through this confusion and ache each day, then I guess there can be some comfort in that.