The Public Is My Scary Place 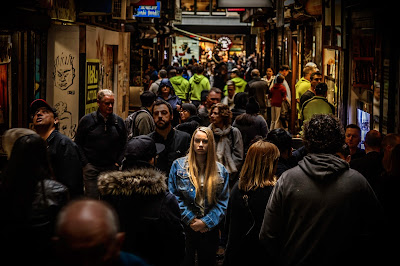 Photo by Mike Wilson on Unsplash

I have never fit in. When I was in high school I wasn’t popular... but I wasn’t a nerd or a freak, either. I was just invisible. Even when I did get up the nerve to join groups (proud Special Mixed Choir member!) I didn’t fit in there either.

In the last few years as I’ve allowed myself to truly be me and I’ve figured out exactly who I am, I’ve found other people who are like me. It’s amazing. I’ve joined groups where like-minded people get together online or in person to talk and share experiences. I’ve never in my life felt like I belonged... until now.

It took me a while to get up the courage to actually go to these events. My ex didn’t like joining these groups with me. He said he just didn’t feel the need. The thing is, he was a geek. He had groups of friends he would get together with weekly to play tabletop games. He had online forums where he could discuss gaming and various fandoms. He was used to being part of something. He didn’t need these new groups like I did.

The problem was, I was terrified to go by myself.

Group activities make me more anxious than anything else. Telling me I have to go to an event alone is the quickest way to throw me into a panic attack. I think of every possibility of what could go wrong and almost always end up talking myself out of it. What if I freeze up and become mute? What if I get so nervous that my throat closes up and I choke to death? What if they’re a cult of cannibals and the group is just a front so they can kidnap unsuspecting idiots like me to serve up with fava beans?!

And then there’s the worst possibility of all – what if they just don’t like me?

I kept up with the groups online, which helped. Even though it was only online, I still felt like I was part of something. I eventually started dating someone who had been going to meetup events with one of these groups for a while. It took some time to build up my courage, but I eventually agreed to go with him.

Naturally I took a Klonopin before my first meetup to help ward off as much anxiety as possible. It helped, but I was still quite anxious. When we got to the restaurant where the meetup was to take place, the lights were off. Of course going to the wrong place is one of my fears! I awkwardly hid behind my date as he found out what was going on. It turns out the restaurant was merely having electrical issues, so the group found another location.

Once we were all settled in at the new location, everyone was incredibly nice and welcoming. They had a group discussion where they encouraged people to get up and move around so as to meet new people and get fresh perspective.

I held onto my date’s arm and whispered “DON’T YOU LEAVE ME” while shooting daggers with my eyes to make sure my point was clear. I despise tactics to get people out of their comfort zones. I’m in public, I’m already out of my comfort zone! Once the panic of possibly having to leave my seat passed, the rest of the evening went swimmingly.

The next few meetups were fine, really. I still didn’t speak up in the group, but would speak to those sitting around me. I continued to feel more and more comfortable around these people until last week.

Last week I went to a meetup accompanied by two dates. (Yes, two dates, be jealous.) I took my precautionary Klonopin beforehand. I was especially nervous about this one because I knew my ex’s ex-girlfriend would be there. I’d never met her, but I’ve known for a while that we’re both in this particular group, so we were bound to run into each other at some point.

The meeting started out smoothly and I got up the courage to speak to the group. The first time I spoke up was so well received that I spoke up again! I felt confident. Then I was reminded why I don’t open my mouth in public.

We were discussing introducing our children to our significant others. I made a few comments and told them about a podcast I’d listened to recently where someone gave excellent advice on this. I mentioned that on occasions where my children meet my significant others, I generally introduce them as my friends and keep our interactions strictly friendly. I then mentioned that my children know that the whore living in their house is Daddy’s girlfriend. I said it jokingly… well, mostly jokingly. They do know that she’s his girlfriend. Quite a few people in the room laughed, so the joke was well-received.

The moderator spoke up and said that while she understands my situation, she would rather I not use slut-shaming terms.

Suddenly my social anxiety was back like a wrecking ball. I’d gone way outside of my comfort zone and was being put back in my place. Why had I ever thought it was a good idea to speak up?!

I sat in my chair quietly for the rest of the meeting. At the end I continued to sit in stunned silence while everyone started packing up to leave. The ex-girlfriend approached me.

Holy shit. I’d planned on speaking to her that evening, but I was no longer in a place where I could think rationally! She introduced herself and said she wasn’t sure if I knew who she was. I said I knew. We spoke a little, and it wasn’t a terrible conversation, but I wasn’t entirely present. All I wanted in the whole world was to run and hide and remind myself why going out in public is bad.

I cried on the way home. I felt shame and embarrassment. These are the things anxiety does when you try to combat it and it wins. I still felt off the next day and said I would never go to a meetup again.

Three days later I’ve gotten some confidence back and, while writing this post, got up the nerve to message the ex-girlfriend and apologize for being weird after the meetup. We actually had a great conversation and she said she even gets called out at the meetups sometimes. That helped my self-esteem tremendously! It’s not just me! I’m not a reject who should never speak!

I will go to another meetup. It may take a while to get up the nerve to speak to the group again, but I always say I’m not going to let anxiety win, and I mean it.