Losing my Spoons or Burning my Matches; Anxiety and Depression 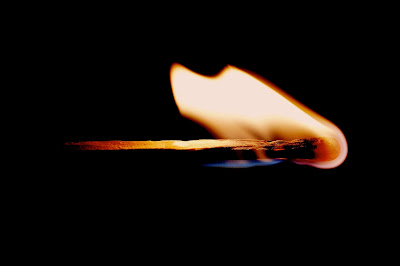 Photo by Yaoqi LAI on Unsplash

Before I even knew anxiety was a thing, I suffered from depression. As it turns out, one can be a side effect of the other. I’m not sure if the chicken or the egg came first with me, but now that I know what to look for, I think anxiety has been a bigger factor in my mental health than I ever realized.

For example: In the past year I’ve had two distinct episodes in which I slept for over 14 hours and wasn’t physically ill. Sleep is my body’s response to severe depression.

I can handle mild depression. I’ve been in a state of mild depression, with the occasional reprieve, since I was a teenager. When mildly depressed I can typically function like normal, though I feel very drained and don’t want to be around people. So, that’s basically me most days!

When I’m severely depressed, the first thing that happens is that my brain shuts down. I literally cannot handle anything else, so I go to sleep. When I wake up I’m usually able to function and actually think rationally – still completely miserable, but at least I’m not catatonic.

In other posts, I’ve listed out all the “what ifs” that run through my mind when my anxiety kicks in. When I have a severe depressive episode, it’s like I have “what ifs” on steroids. It’s no longer a “what if.” It becomes a “will.”

And, inevitably, “I just want to die,” follows.

With me, severe depression is almost always caused by something specific. Luckily it doesn’t happen often, but when it does it hangs around for a while. Even after I’ve come out of the long sleep and am able to actually think, I still have a hard time finding the will to take care of myself. Basic tasks like showering or doing the dishes seem incredibly exhausting, so I just don’t do it.

The Spoon Theory is an excellent way to explain the inability to do everyday tasks when depressed. It is used to describe the reduced amount of energy a person with chronic and/or mental illness has to spend on tasks. A normally functioning person starts the day with 12 spoons, and uses a spoon for each task they complete. They are typically able to get through the day with a few spoons left. A person with chronic illness may have an especially bad episode where they wake up with only 6 spoons, and uses 4 of them just having a conversation. They may start out the day with 12 spoons, but the act of simply going to work uses up 10 of them, and they just don’t have enough left at the end of the day to do the laundry. Make sense?

If I’m having a good week, I’ll typically wake up with all my spoons. However, it is so easy to lose them. Depression and anxiety use up my spoons like I’m going on a soup binge (except not nearly as satisfying.) It’s hard for folks who have never dealt with depression and anxiety to understand how a person can not have the energy to shower when they seem to be perfectly healthy. The simplest of tasks can seem the most daunting when you’re out of spoons.

Loved ones often ask how to help me get out of The Great Spoon Depression, but I never have a good answer. Most often my only response is “keep loving me.” Sometimes that’s all you can do.

A great variant on the Spoon Theory is the Matchstick Theory. Much like the Spoon Theory, you start out with a pack of matches. You get up in the morning and strike a match. It may or may not stay lit on your way to the bathroom. Sometimes when you strike the match, it breaks and doesn’t light at all, so you have to use up another match. As explained on trexismyspiritanimal.com, “Then come the mornings where you wake up to the smell of sulfur. That last spark from last night’s last match has landed on today’s matches and incinerated them.” I highly recommend checking out the article I linked above. They’re delightfully snarky.

Fellow Spoonies (or Forkies; insert your utensil or matchbook of choice here) have said that they only want to be left alone when they get to a really bad place, however, having someone hold them accountable for getting up and showering or getting dressed helps a lot. Sure, they might be pissed at you in the moment, but later they’ll thank you for not letting them wallow in despair. Eventually…Hopefully.