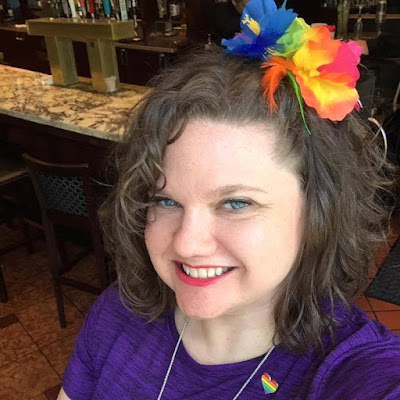 Today I give you a guest post written by one of my dearest friends in the world - Leslie Hamilton.

I have only really become aware of my depression in the past year, though I was put on an anti-depressant about eight years ago when I expressed to my primary care doctor that I cried at the drop of a hat. There was no talking about what may be causing it or any other suggestions offered to help cope with it. I was simply written a prescription for a drug.

He folded the paper and handed it to me. I was terrified. Had I become one of those people? Someone who was going to need a drug to manage getting through the day?

Then the what-ifs rolled in - What if I never cry again? What if I’m numb all the time? What if I become a completely different person?  Naturally I cried as soon as I got in my car, since that’s my immediate response whenever I am overwhelmed.

I texted my best friends and shared the experience. I received so many boosts of confidence reassuring me that this was the right thing to do. After several days, I finally took the paper to the pharmacy. Not long after that my grandmother passed away and I quickly found that I had not changed – I could still cry and feel. Fuck, could I feel. Thus began my journey to understanding my mental health.

Before anti-depressants, I felt like I was on my own with this struggle. Mental health was simply not spoken about in my house. No mental health issues were spoken of, for that matter. I was ending my adolescence and finding who I was as a person. It was not an easy time in my life. I had ended my relationship with my high school sweetheart / fiancé, lost my virginity to one of my ex-fiancé’s friends, and in turn lost all of my friends. Not my finest hour. I really struggled because I had zero coping skills, as I truly did not recognize that a lot of these symptoms and actions were a result of depression.

Fast forward to the present: I’ve recently had some trauma in my life regarding my family. I know, get in line, who doesn’t have family shit? I lost the sister I was closest to. To make it worse: she is still alive, reasonably healthy, and lives less than 15 minutes away. I haven’t seen her or spoken to her in one year, four months, and seven days. We used to speak at least twice a week, and see each other face-to-face at least once a week.

She met a man who completely took over her life. He verbally assaulted me and she stood by him, leaving me to crumble. I was heartbroken. Having no significant other, I reached out to my mom who immediately went to bat for me against the two of them. My sister then cut out any of the immediate family who knew what had happened and thought she was in the wrong.

I was so angry and so damn sad. I cried every day. I would go weeks without seeing my nephews, when I was used to seeing them at least once a week. This lead to me becoming entirely broken. Not only did I lose my sister, but also my nephews – children who I love dearly.

At that point I didn’t care about much of anything, and it was starting to show in every aspect of my life. My hygiene tanked, my housekeeping became nonexistent, and my job was suffering. I finally realized this in Dec of 2016 and sought additional help – a counselor. This was by far one of the best decisions I had ever made in my life. I needed to learn how to cope since there was no end in sight to this hell my life had become.

I shared my hardships with my bosses to try to give them some understanding as to why my job performance was lacking. Unfortunately these two women had only recently begun working with me, so they had no real indication of my work ethic. Even with therapy, starting an upswing and getting back on track, and getting caught up with my work, the new bosses had meeting after meeting to discuss all the things I was doing wrong. It was the downward trickle of the slacking work from the fall.

This sent my dormant anxiety through the roof. (Oh yeah, I have anxiety issues too!) They nit-picked every little thing I did – this paper was folded wrong, I was 4 minutes late, and I missed this one assignment two weeks ago. Because of this, every morning I would be anxious to even walk in door. This caused my depression to flare up and put me in a cycle of struggling to get out of bed, being late and being miserable all day waiting for my bosses to jump my ass for one thing or another. I couldn’t focus and I went into panic attacks at my desk, sobbing and shaking.

This went on for about 6 months and then one morning I was late again. I looked at the highway in front of the building and thought it would be easier to walk into traffic than go in the building and face the two of them. SOMETHING HAD TO CHANGE. I asked my HR director about FMLA that day and then debated for a month about whether or not I was actually going to take time off. Contrary to my bosses’ beliefs, I have a great work ethic and felt awful about having someone else do my work while I was out.

My HR was useless in the process, so that had me second-guessing my decision as well. I had no clue if I was doing the right thing. Thankfully, I have an amazing support group in my life – my friends, family, and counselor all helped and encouraged me to take the time – I clearly needed it. Remembering how I felt that afternoon, looking out at the highway and contemplating ending my life, I decided to take the time off work. I kept telling myself I need to do this.

Even while I was off work, I was skeptical if it was worth doing. Was it really helping or was I only happy not being at work? Time passed. I slept for days. Then I started cleaning and slowly getting things back in order. It was beneficial after all. I started smiling again – something I wasn’t sure I was capable of anymore. I had hope again. I felt amazing, but soon I had to go back to work. As much as I wanted to, I couldn’t avoid it forever.

I’ve been back to work for almost 4 months now, and things are different but the same. I am protected by the law under FMLA so my bosses don’t say anything to me if I overlook an assignment or if I’m late. The pressure is off there, mostly. I still panic a little, wondering what they are actually thinking about that assignments being late, even though that is an infrequent occurrence these days. They say encouraging words to me, but I don’t believe them. How can I, when for so long all they told me is that I wasn’t good at my job. They will always handle me with kid gloves.  I need to be treated like an adult woman who is capable, because that is what I am!

I hope this rambling of my mental health journey is helpful to anyone reading it. The journey continues for me, and it will for the rest of my life. Depression does not go away, no matter how many times you tell it to fuck off. Depression is a motherfucker who tries to rule my life. Sometimes it wins, other times it listens and does indeed fuck off… for a bit. When it persists, I remind myself that I will not always feel this way. This too shall pass.