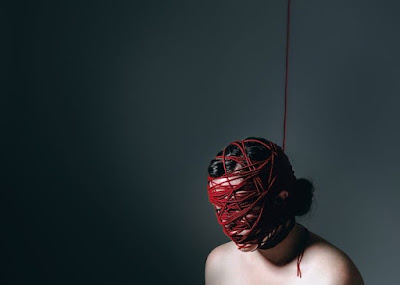 She couldn’t breathe. She couldn’t see. The world was red. Her mind was numb and going in a thousand directions at once. Her heart was racing. A shot of pain told her she had been clenching her jaw for who knows how long.

What was going to happen to her? How long would she be in this hell? Would she die? What about everything she had to live for? Did it even matter? She couldn’t move. If she could just move, it would be okay. She could escape. But she was shaking.

Suddenly there were hands gripping her arms. “No! Get off of me!” she screamed.

"Just breathe,” the voice said again. Slowly, the world came back into focus. Her heartbeat slowed, her breathing returned to normal. It was just another panic attack.

Everything would be okay.

That is a short story I wrote in response to a flash fiction challenge that I follow. Naturally, I’m terrified of actually submitting anything I write, but occasionally one of the photo prompts inspires me to jot something down. The prompt in this case (shown above*) was a photo of a woman with red yarn around her neck and head. I instantly knew what I wanted to write.

I knew because to me, panic attacks often feel like I’m strangling.

The feeling of a panic attack differs from person to person. Often, a person can experience panic attacks that feel different every time. I know someone who is no stranger to panic attacks and once called 911 because he thought he was having a stroke – he actually lost the ability to speak. It turned out to be a panic attack.

Many people report increased heart rate, perspiration, dizziness, difficulty breathing, chest pains, or feeling a loss of control. A number of people, including myself, often feel unreasonably angry during a panic attack. Looking back at my life, I realize I don’t necessarily have a short temper – it’s usually anxiety that causes me to snap at people and lose the ability to control my emotions. Most often panic attacks end with me crying uncontrollably.

I have a few different types of attacks. Most often, my social anxiety elicits a flight response. My heart races, I feel jittery, my mind goes blank, I can’t breathe, and with every fiber of my being all I want is to GET OUT. I’ve left carts full of food in grocery stores to run for the exit. I’ve called friends from outside of parties to say I can’t come back in.

Even if I’m simply presented with the opportunity to be in a social situation that I know will make me uncomfortable, my heart starts to race. My mind starts running through every possibility of everything that could go wrong, no matter how unlikely. I typically come up with an excuse to not go, however lately I’ve started saying “I’m sorry, my anxiety won’t let me.”

Stress-related panic attacks are the worst for me. This has happened often when fighting with a significant other or when feeling overwhelmed by responsibilities. I have all the same symptoms of the social anxiety attack, however with whatever emotion I’m feeling piled on top, I’ve been known to have angry outbursts. I’ve thrown quite a few remote controls and phones, I’ve yelled at people, slammed doors, and have on occasion resorted to self-harm. I’ll talk about that another time, but that’s definitely the worst that I get. I’m typically a pretty calm person. I’ve been commended on handling difficult situations with a calm, cool demeanor.

But when a panic attack hits, I lose myself… and it’s unbelievably difficult to regain control.

Next time I'll discuss how to recognize anxiety triggers and how to cope with panic attacks.